Train Your Children in the Habit of Always Redeeming the Time by J.C. Ryle

Idleness is the devil's best friend. It is the surest way to give him an opportunity of doing us harm. An idle mind is like an open door, and if Satan does not enter in himself by it, it is certain he will throw in something to raise bad thoughts in our souls.

No created being was ever meant to be idle. Service and work is the appointed portion of every creature of God. The angels in heaven work, — they are the Lord's ministering servants, ever doing His will. Adam, in Paradise, had work, — he was appointed to dress the garden of Eden, and to keep it. The redeemed saints in glory will have work, "They rest not day and night singing praise and glory to Him who bought them." And man, weak, sinful man, must have something to do, or else his soul will soon get into an unhealthy state. We must have our hands filled, and our minds occupied with something, or else our imaginations will soon ferment and breed mischief.

And what is true of us, is true of our children too. Alas, indeed, for the man that has nothing to do! The Jews thought idleness a positive sin: it was a law of theirs that every man should bring up his son to some useful trade, — and they were right. They knew the heart of man better than some of us appear to do.

Idleness made Sodom what she was. "This was the iniquity of thy sister Sodom, pride, fulness of bread, and abundance of idleness was in her" (Ezekiel 16:49). Idleness had much to do with David's awful sin with the wife of Uriah. — I see in 2 Samuel 11:1 that Joab went out to war against Ammon, "but David tarried still at Jerusalem." Was not that idle? And then it was that he saw Bathsheba, — and the
next step we read of is his tremendous and miserable fall.

Verily, I believe that idleness has led to more sin than almost any other habit that could be named. I suspect it is the mother of many a work of the flesh, — the mother of adultery, fornication, drunkenness, and many other deeds of darkness that I have not time to name. Let your own conscience say whether I do not speak the truth. You were idle, and at once the devil knocked at the door and came in.

And indeed I do not wonder; — everything in the world around us seems to teach the same lesson. It is the still water which becomes stagnant and impure: the running, moving streams are always clear. If you have steam machinery, you must work it, or it soon gets out of order. If you have a horse, you must exercise him; he is never so well as when he has regular work. If you would have good bodily health yourself, you must take exercise. If you always sit still, your body is sure at length to complain. And just so is it with the soul. The active moving mind is a hard mark for the devil to shoot at. Try to be always full of useful employment, and thus your enemy will find it difficult to get room to sow tares.

But if you love them well, let idleness be counted a sin in your family.

The book "The Duties of Parents" can be found here: J.C. Ryle 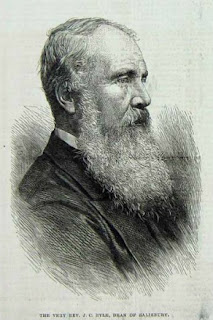