Seeing Sin For What it Really Is by J.C. Ryle

The Christianity which is from the Holy Spirit will always have a very deep view of the sinfulness of sin. It will not merely regard sin as a blemish and misfortune, which makes men and women objects of pity, and compassion.

It will see in sin the abominable thing which God hates, the thing which makes people guilty and lost in his Maker’s sight, the thing which deserves God’s wrath and condemnation. It will look on sin as the cause of all sorrow and unhappiness, of strife and wars, of quarrels and contentions, of sickness and death – the curse which cursed God’s beautiful creation, the cursed thing which makes the whole earth groan and struggle in pain. Above all, it will see in sin the thing which will ruin us eternally, unless we can find a ransom, – lead us captive, except we can get its chains broken, – and destroy our happiness, both here and hereafter, except we fight against it, even unto death.
~ J.C. Ryle
Tract: Authentic Religion 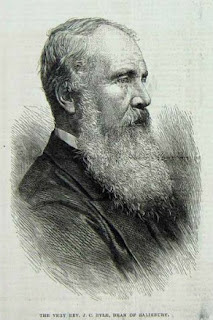